Just because God made you doesn’t mean you don’t share a common ancestor with other animals. PLEASE hear me out for a few seconds – I swear I’ll make this as short and concise as I can so you’ll read it all…

Remember the poster of the periodic table of the elements in school? Those are all the different kinds of atoms that make up everything in the universe – think of them as Lego. There is a very small and finite amount of them. To make something, you just put these atoms – or blocks – together in different patterns. Glass is made of silica, which is silicon dioxide, or one silicon atom and two oxygen atoms. Put those together and you get glass. Water is H2O, or one hydrogen atom and two oxygen atoms. People are made of a bunch of different atoms but mostly we’re made up of oxygen (65%), carbon (18%), and hydrogen (10%). Trees and monkeys and rocks are all made up of the same stuff, just put together differently in different patterns.

The pattern that makes you human is called your genome. Every living thing has a genome and it is encoded in its DNA. Every living thing has DNA and it’s stored in the nucleus of its cells. Every living thing – monkeys, rabbits, fish, you – has cells (excluding viruses and prions, etc.) that make up its body. In order for our bodies to grow, we eat atoms (food) and our bodies combine these atoms to duplicate and replace its existing but dying cells. Making exact copies of your cells and the DNA it contains is very hard to do and sometimes mistakes are made.

These mistakes are called mutations. Most of the time, these mutations are bad (cancer), but sometimes these mistakes can be good (blue eyes). These mutations will be passed on by the parents whether they’re good or bad, but usually if they’re bad, the child won’t survive long enough to continue passing on that bad DNA. When things die because they’re not suited for their particular environment, it’s called Natural Selection. For example, the giraffe with the slightly longer neck will have more of a chance of surviving when food is scarce and only available at the tops of trees than the shorter giraffe, so the taller giraffe’s kids will all have longer necks while the shorter giraffe will die before it can have kids. These types of mutations over a very long time can lead to vastly different looking animals; this is called Speciation.

Speciation is why you look different than a cat. Speciation is why you look different than a monkey. Speciation is why you look different than a chimpanzee even though your genome – the pattern that makes you, you – is about 98% identical to chimpanzees! Chimpanzees (Pan troglodytes) are Humans’ (Homo sapiens) closest genetic relative. If you continue to compare other living organisms’ genomes and put them in a sort-of graph that’s easier to comprehend, you’ll notice a branching bush or tree-like structure emerges. You can make a similar ‘tree’ when you compile all the fossils we’ve found of all the organisms who have became extinct. When you combine this relationship of all living things with the enormous fossil record that makes the ‘tree of life,’ you’ll easily notice that you do, in fact, share a common ancestor with every other living creature on this planet. You DID descend from another animal whether you like it or not.

“The good thing about science is that it’s true whether or not you believe in it.”
— Neil deGrasse Tyson

You can be made by God and still be a very intertwined component of
the universe. Come join us in the Web of Life! 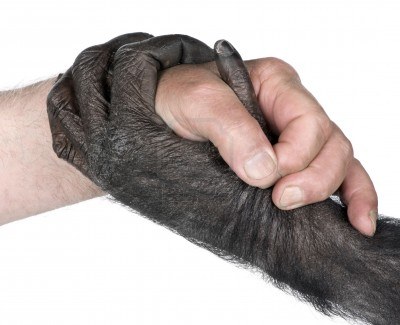