Friday, March 8th… FINALLY, the first clear night after a long stretch of cloudy, freezing weeks. It has been either too cold or just plain cloudy for a pretty long time so when I saw the forecast for this evening, I knew I had to take advantage of the clear skies and get some imaging done.

My main reason was to get some good images to enter into a photo contest at work. I didn’t get any images I felt like I could use for the contest but as it turned out, I found some pretty photogenic planetary nebula I had never seen before and got good shots of them – which is even better in my opinion. Remember, planetary nebulae are stars that reach the end of their lives and subsequently eject the outer layers of themselves. As the star dies, it expels the outer layers of its atmosphere due to imbalances with its fusion engine and gravity. *They have nothing to do with planets!*

I didn’t seek out these objects specifically; I basically used the ‘tour’ function on my go-to Celestron mount and hopped around to a bunch of pre-programmed objects and imaged them as I went. I took multiple images of probably twenty to twenty-five different objects for a total of over sixty images. Most were unusable, per usual. A few I was able to save. After editing, I whittled the bunch down to just two images. Ironically, the two images look VERY similar even though they’re of two completely different objects. 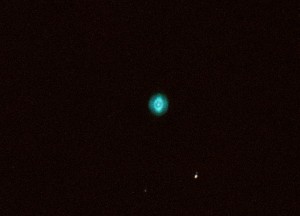 The Ghost of Jupiter (also known as Caldwell 59) is a planetary nebula located in the constellation Hydra at a distance of 1,400 light years from Earth. 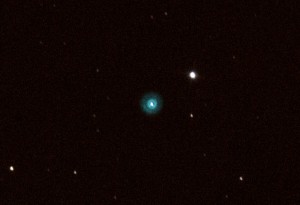 The Eskimo Nebula (also known as Caldwell 39) is a planetary nebula located in the constellation Gemini at a distance of 2,870 light years from Earth.

The thing I’d like to emphasize more than anything about these photos is that, aside from a little brightness/contrast tweaking (to counteract the horrible light pollution), I didn’t enhance these images at all. The color you see is what color these planetary nebulae actually are. The light blueish-green shell of expanding ionized gas glowing in the infinite darkness of space is breathtaking – and real! I was unaware of the vivid colors that dot the sky above our heads until I got a chance to see them for myself. I mean, I’ve seen the beautiful images that line the pages of astronomy magazines and books, but most of those have been enhanced in one way or another to bring out certain characteristics. But I have done none of that to these images. It just makes me that much more happy to know that there’s just *that* much more beauty hiding in the universe, waiting to be discovered.