It has been a while since I’ve updated the site so I thought I’d quickly spell out what has been happening over the last few weeks… (months?)

WEATHER! Weather has been happening! This winter has been a complete inverse of last winter. I think we had maybe one or two days of snow last year? Rarely got below freezing? I may be exaggerating a little, but that’s what I remember anyway. This winter, on the contrary, has been horrible! I’m sure we’ve set records in consecutive days below zero, temperature and wind-chill, amount of snow fall, whatever, take your pick. It has definitely been one of the worst winters in my memory. Heck, there were multiple times when I went out to the observatory and physically couldn’t get in because the door was frozen shut! I poured hot water over the door once because I had to get in but after that, I quit trying. (Extra security measure?) Not that it’s that consequential since I wouldn’t be able to use my scope if I could get in anyway; I can’t tell you when the last time I saw a clear sky was. And even if I did, my nose hairs froze before I could look up and find the moon!

So in the meantime, I’ve been working on a fun indoor project: a rover. See, I’ve always loved all things Space whether it be manned space travel through NASA’s Shuttle and the moon landings, to the study of distant objects through telescopes and observation. I’ve only recently started to truly appreciate the unmanned spacecraft.  The Voyager probes, the Mars rovers, the orbiters around Jupiter and Saturn are all awesome. But for some reason, I didn’t realize just how awesome they really are! Honestly, Kerbal Space Program might have a little to do with it since most of my ‘missions’ involved landers and rovers since I didn’t want to jeopardize my Kerbals’ lives. Plus, the Mars Exploration Rover, Opportunity, has been in the news recently celebrating its 10-year anniversary on Mars – only originally planned and designed for 90 days! Curiosity has continued to make news-worthy discoveries while sending back amazing pictures from the surface. Multiple space agencies have recently sent missions to Mars as well as the moon (China, India, and US) which keeps public interest – as well as my own – in space exploration very high. Add to that New Horizons getting awfully close to Pluto, along with many other robotic missions currently active in the solar system and you get a magically exciting atmosphere of discovery and exploration – using robots!

I decided I wanted to be a part of that. Since I don’t work for NASA or SpaceX or Orbital or the ESA or any of the other agencies where my dream job resides, I must live vicariously through the real engineers work while at the same time, try to develop my own ‘rover.’ The benefits are many-fold: I get to learn so much about mechanics and especially electronics by implementing these ideas which I should already know and understand, given my background. By designing my own rover, I learn SO much about applied electronics while being able to appreciate how amazing the engineering of the real rovers is. The rover will utilize various sensors like a temperature and barometric sensor and possibly a range finder. It will be driven by four motors using an Arduino micro-controller for the brains. All of these things requires research and development which I’m more than willing to devote my time to. Plus, who doesn’t want to play with a rover?! It’s my grown-up toy of choice right now. Anyways, most of the mechanical stuff is done so now I’m just waiting on a few electronic components so I can finish the motor driver circuit. After that’s completed and the rover will be mobile, the next step is wireless communication, then sensor implementation.

So, that’s what I’ve been up to recently. I haven’t abandoned the site or the observatory, just utilizing my tools and time accordingly given certain circumstances – mainly, the weather! Talk to ya soon!

-Most recent image of the rover- 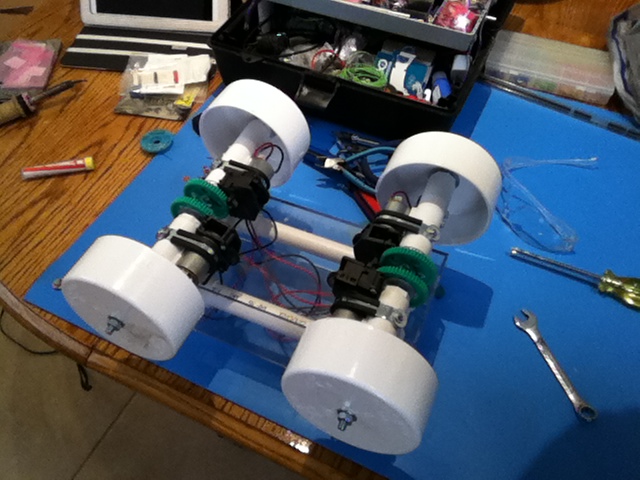