A Morning Run, Then a Lie Down

This time of year the grass is usually dry and brittle, worn out after another year of rain, then relentless heat. It makes sounds on feet like stiff yellow straw. But this late summer morning the grass was fluffy shag carpet; soft and comfortable. I crossed the field as if tip-toeing towards my gifts on Christmas morning. If I didn’t look down and see my shoes landing atop the grass and dirt, I would have swore I was wearing house slippers, gliding over the living room rug. 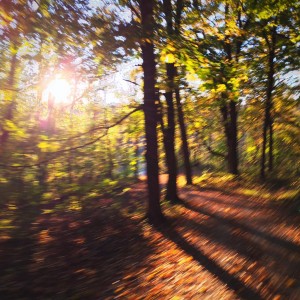 It was a new weekend, infused with optimism and opportunity. The air was cool and crisp, though the sun felt higher than it should have been this time of day. The sky was so uniformly blue it seemed it had forgotten what clouds were – that they were even a choice. From my viewpoint, I was the last person on the planet, left alone only with fields, trees, birds, and streams.

I was planning on at least one full tour of the Slate Run Metro Park trails, but twice around would make my run an even half-marathon. The middle portion is fields and grasslands and I had already passed through the forest area where I climbed steep hills and weaved along streams, all while under the safe canopy of the surrounding trees. I knew it was going to be a good run the moment I passed the startling orange jack-o’ lantern mushrooms that crowded round the base of the large old maple. It was an omen-come-true, embued by the mere existence of destiny. After seeing that, I happily embraced however far my feet would carry me.

Nowadays, thirteen miles takes a little under two hours for me to complete. But two hours is practically an eternity in today’s nonstop world doing only a single thing. And running isn’t always easy or comfortable; mostly it hurts, is difficult, and can be brutally exhausting. But I’m used to that now. I’ve become accustomed to the uncomfortable. Plus, the pain is dulled by the feeling of freedom and the beauty of Nature.

There are times when repetition turns into autonomy and effort becomes effortless. I feel the breeze, and I become the breeze. I move up and down with every hill and slope. I forget I’m breathing because the air breathes for me. The cicadas scream acceptance while the leaves rustle and clap, welcoming me as an honorary member. I belong there like a kestrel floating on the wind. 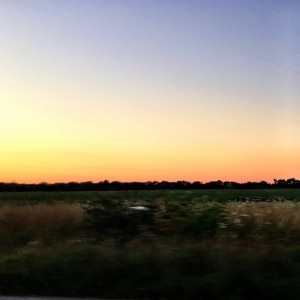 From forest to grasslands to wetlands at last. The lowest area of the park is where ponds form and frogs thrive – along with countless other animals and insects fighting for attention. Interesting sights and sounds are never rare, occasionally accompanied by a strange and sometimes frightening animal call too eerie to investigate.

The entire wetlands scene can be taken in from a strategically placed overlook back atop the hill. But this overlook has a guardian: a dark, menacing tree with oversized owl talons for branches, and bark that has peeled away like old, dead skin. I love that tree, and I am terrified by that tree. Every time I see it, it invokes a feeling of unease impossible to express.

Out of harm’s way and back into the open fields, I feel the safety and protection offered by the tall pines in the distance. They stand guard, securing the borders. They are the last line of defense for the illusion of seclusion. I am a patriot, and I swear allegiance to them.

I finish my tour of this small, unremarkable corner of the world. It’s inconsequential – just like me. We’re both a dime a dozen. The universe won’t bat an eye once we’re gone, and I don’t blame it. That’s just the way things are.

But on this particular morning we shared an experience together, and it was special to me. I won’t soon forget the softness of the grass, the eeriness of the tree still lingers, and the deep connection I felt with Nature will have a lasting impression.

And I think She’ll remember me, too. She’ll accept me with a mother’s embrace the day I lay down and become the grass.