I’m an adult with a career and a family …and I play video games. They’re my guilty pleasure, what can I say?! I’m not embarrassed to admit that. I will say, however, that I probably play video games for reasons other than most people.

For me, video games create a means for escape. No, escape isn’t the right word because I actually love my real life. But they do create a chance for my imagination to embrace ideas and situations I might not normally get to experience. A good example of this would be Red Dead Redemption (or, RDR for short). 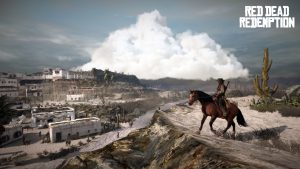 RDR is a game in the style of an American Western film. Set in a faux American southwest during the turn of the century, you play as an outlaw cowboy determined to right his wrongs, get redemption for a life of crime, and get his captured family back to finally live in peace. Ironically, a lot of violence must occur in order to ultimately reach that much-desired peace.

Yes, Red Dead Redemption is a game developed by a company named Rockstar, well-known for creating the infamous series Grand Theft Auto (or GTA). That series has been the subject of ridicule for its unabashed “embrace” of violence, drug use, and prostitution. And to be completely honest, Red Dead Redemption has been justifiably described as ‘Grand Theft Horse’ because of the many similarities between the two. -Not going to lie, I love Grand Theft Auto, too!

But here’s where my love for all of these games diverge from what makes these games so popular. Spoiler alert: it’s NOT the violence. In fact, I play -and love- these games in spite of the violence and crude humor – I honestly wish there was a lot less of it! I love these games because of the open-world, the seemingly limitless options of exploration and experience, but most of all the feeling the environment invokes; the world-building in a Rockstar-developed game is second to none. 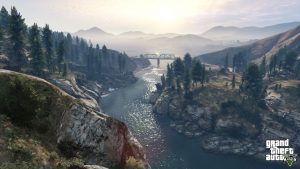 I get it though, Rockstar is a publically traded company beholden to their shareholders, and shareholders love money. And what makes a lot of money in today’s culture? Sex and violence. Furthermore, these games are some of the most expensive forms of media ever produced! Development costs for RDR are estimated at around $100 million, and the development and marketing budget for the latest GTA iteration, GTAV, is around $265 million!

So, I understand why it’s there. But I can also justify it to myself and marry it to my love for these games because of the additional layer of realism these options provide. Do you have to pick up a prostitute in these games? No. But the option is there – just as it is in real life. Do you have to murder countless cops or sheriffs or innocent horses to experience joy? You don’t if you’re me. But the mere option that I could if I wanted to makes the immersion that much deeper. Just remember, there’ll be consequences to pay.

But here’s the thing: Rockstar didn’t just add killing and sex to these games, they also added realistic day-night cycles, dynamic weather patterns, advanced A.I. (artificial intelligence) to the characters and animals, and an extremely detailed environment where seldom a blemish is found. Zoom in on a tree leaf or horse leg or trash can and you’ll know what I mean. The level of detail and obvious love the artists and designers poured into these games is astounding. It’s apparent by the world you find yourself in every time you turn on the game and find yourself standing in the closest thing you can get to a real-life simulation. (You can also scuba dive, hunt, play golf, jet ski, sky dive, fly airplanes, ride bikes, take the subway, buy a candy bar at the gas station, get money out of the ATM for a new tattoo… just to name a few things.) 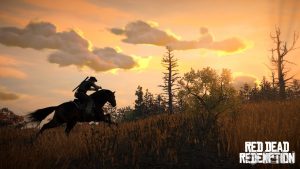 I was reminded of just how immersive these worlds are this morning as I was getting ready for work. For me, the morning can be my favorite time of the day. I love the quiet optimism and inspiring possibilities it imbues. And the gorgeous colors the sunrise creates never ceases to instill upon me the Ultimate Beauty of the universe. (I’m also a huge nature-lover as well, if you can’t tell.)

In fact, my morning routine will sometimes include watching one of my favorite nature ‘documentaries’ called Sunrise Earth on TV. Sunrise Earth isn’t a documentary as much as a real-life screensaver. There is no dialog or music, only a set of cameras and microphones faithfully capturing sunrises from different locations around the globe. It gives me the chance to experience the awe of Nature’s most beautiful places without having to leave my home – or when the real sky outside is grey and overcast.

What does a tranquilly beautiful nature program like Sunrise Earth have to do with a violent video game like GTAV or Red Dead Redemption? As I said, the world-building in Rockstar games are impeccable and vividly mimic nature. I don’t “play” these games as much as I “experience” them. Rarely do I find myself in a high-speed car chase or gunning down bad guys. Most of the time I enjoy simply strolling along the beach or taking a hike on the perfectly detailed mountain trail. 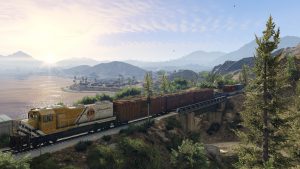 One of my favorite things to do in GTAV is to travel to the portion of the map that imitates the Pacific Northwest and simply take in the view of the rocky cliffs and rolling ocean while listening to the expertly mixed bird calls and other ambient sounds of the wild. If I let myself go… just a little… I can almost feel the breeze on my cheeks and taste the salt of the sea spray. The stoic lighthouse in the distance and the weathered wooden pier nearby help complete the picturesque scene.

This morning, instead of turning on Sunrise Earth, I watched the sunrise from a simulated Pacific Northwest beach with an army of tall pines guarding my flank. And honestly, to me, the experience was better than any nature documentary could have provided. I was there. I got to actually walk over to the pier and check out the coral clinging to the aged posts. I got to peer up at the early morning stars waving goodbye as the blackness of night turned to an optimistic blue.

Once I found my ‘perfect spot,’ I turned off the HUD and mini-map cluttering my view, set the controller down and drank my real-life coffee and just took in the view. When the controller is idle, the game camera switches to a first-person mode and with life-like movements, pans around the vista showing off the environment as if you were actually there. I sat back and smiled with joy watching my personal Grand Theft Sunrise nature documentary. It was perfect… 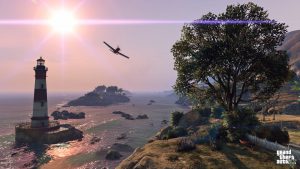 But as I sat and watched the waves roll in, I wondered how ironic it would seem to any one of the approximate 1000 people it took to create GTAV, and after hundreds of millions of dollars and many years of development, what I enjoyed most about the crime-ridden game is what amounts to a “sunrise simulator.”

I’d like to imagine at least some of them would be happy. I’d bet the graphic designers and sound engineers would be flattered to know that the world they created as a mere backdrop for most folks to go on murdering sprees is also used by people like me who appreciate the love, commitment, and attention to detail that is all too often overlooked.

Every now and then I’ll fire up Red Dead Redemption just to visit the American frontier of yesteryear. As I walk down the one main street in the pre-ghost town of Armadillo, I realize it’s the closest I’ll ever get to experiencing life in the Old West. Luckily for me the good folks at Rockstar know how to make a damned good-looking and polished game. Without exaggeration, these games are masterpieces. 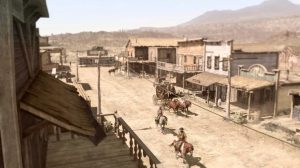 Even though I know Paris, France is an honest-to-goodness real place, somehow it seems slightly less real than the streets of Los Santos in GTAV. I’ve strolled under the simulated street lights at night of Los Santos, just as I’ve rode a virtual horse under a starry Western sky in Red Dead… and those memories are real to me. But I don’t even have ‘fake’ memories of the Louvre or the Eiffel Tower. I’ve never walked down a street in Paris – actually or virtually! But I have walked into a musty saloon as a movie-credit-roll-inducing sunset blazed behind me and ordered a shot of whiskey from a bartender whose existence is just as real as the 1911 version he was modeled after.

As I write this in early 2018, I wait with bated breath for Rockstar’s next installment, the much-anticipated Red Dead Redemption 2. I’m sure it will have excellent writing, great character development, and plenty of violent train robberies and whiskey drinkin’. But the thing I’m looking forward to the most is listening to the perfectly tuned soundtrack to whisk me away to the Old West… the American Frontier where I can ride my trusty steed across deserts and prairies, up mountains and across rivers so I can experience a place and time long out of reach – even if it is just in my imagination.