When Ella was one year old, about five years ago now, I weighed 205 pounds. Up until then I was OK with that. For some reason that winter, I decided I wanted to lose about 10 pounds – nothing crazy. I remember seeing pictures of myself at around 192 pounds (about 10 pounds lighter) and thought, “Man, I looked skinny!” So 10 pounds was my goal.

I made changes… gradually. I made a few small changes and starting eating slightly better and started ‘moving around’ slightly more. Instead of sitting there watching TV, I stood up and picked up the house and watched TV. Maybe during a commercial I’d do some push-ups. A little weight started to come off, I felt a little better, so I picked it up a little more. I started running (short distances – I couldn’t even finish a whole mile then) and playing tennis with a buddy after work here and there. More weight started coming off and I felt even better. 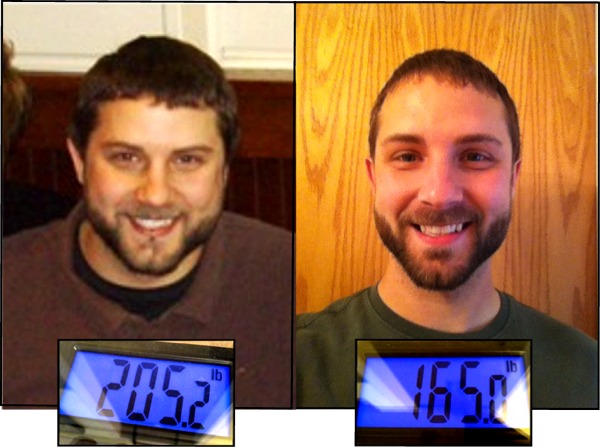 But here’s the thing – it didn’t seem ‘hard.’ I wasn’t starving myself – in fact, I was still drinking beer and eating nachos almost every single night – and I wasn’t killing myself on 90+ minute workouts. Some folks decide they’re going to lose weight and go from binge-eating pizza laying in bed one day, to absolutely zero bread/pasta/milk/whatever and grueling workout regimens the very next day. How in the world is that sustainable?! It’s not, and those people always fail. Small lifestyle changes add up to big differences over long periods of time.

About a year and a half after I started, I had lost 40 pounds accidentally! I didn’t even mean to… remember, I just wanted to lose 10 pounds. I basically tricked myself into a lifestyle that slowly gained momentum resulting in big changes over time; like putting a frog into lukewarm water and slowly raising the temperature until it boils. I don’t recommend trying it, but it’s true! The frog will die and not even realize it’s boiling to death.

I was never a good runner. Even back in high school when running was a huge part of wrestling practice I hated it. I still don’t “love” it, but now that it has become easier, there are times when I don’t mind it. It’s the benefits I love. I’m still slow though. The farthest distance I got up to was 4 miles about two years ago when I was running the most. My normal routine now is around 3 miles, give or take – but only once or twice a week.

My goal now is to just stay healthy – which my yearly health assessments at work have shown definite proof and improvement of – and never get to the point where I cannot run at least one mile. What’s amazing is how much it truly does impact your health. I sleep better, I feel better, I think better, I’m happier, I have more confidence, my blood pressure is down, I accomplished something that I’m proud of… my heart PVC’s have almost stopped! I told my doctor this and he said, “You see now how diet and exercise actually works?! I wish more people would take our advice.” (Actually, at one point, the PVC’s started to come back and get worse and I couldn’t figure out why. I then started mindfulness and conscious breathing to help reduce my stress level and they practically went away again!)

I just didn’t realize how awesome being healthy was. Quick key point here though: exercise, eating right, and good sleep habits are all intricately connected and equally important; they all feed off of each other and you need all three.

So anyway, I ran outside yesterday for the first time this year and afterwards, I weighed 158.6 pounds. My average weight over the last few years has held steady at ~165 pounds. Technically, based on BMI, ‘overweight’ for my height is 170 pounds, which I’ve been dangerously close to. The low end is 130 pounds. I’d like to stay safely in the 150’s if I could. Funny thing is, beginning of my senior year wrestling season I wrestled at 152 pounds which is actually where I want to be now. There’s an obesity epidemic in America and I just don’t want to be part of the problem, ya know?

So if you’re thinking of losing weight but are dreading the hard work and missing your favorite foods, realize that it doesn’t have to be as tough as you think. Sure it may  take longer, but it’ll be much easier. Slow and steady wins the race. You can still eat pizza if you want, just not six slices! Everything in moderation. Eat just one or two slices. Your stomach will start to shrink and eventually you won’t even be able to eat six slices anymore! Plus, things start to taste so much better when you refrain from them every once in a while. And stop snacking! You don’t need that stuff… eat your meal and go do something else. It’s springtime, go outside! Good luck!